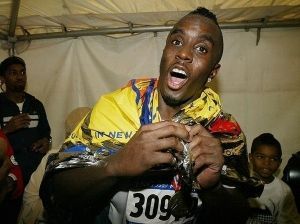 NEW YORK – NOVEMBER 2: Rapper Sean « P. Diddy » Combs celebrates after running the New York City Marathon in four hours and fourteen minutes November 2, 2003 in New York City. Over 30,000 runners from all over the world participated in the annual race, one of most famous marathons in the world. Combs was running for charity. (Photo by Mark Mainz/Getty Images)